Paul Pollick is a bit of a mad scientist.

The New Kensington man doesn’t look it at first glance. He wears jeans rather than a long white coat, his hair is neatly combed instead of being Einstein-wild and his laboratory is a root cellar lined not with test tubes and petri dishes, but row upon row of colorful and pungent five-gallon buckets, plastic jugs and old cashew jars.

But make no mistake, he’s an experimenter, using things such as ear wax, tear ducts and saliva in an attempt to create the ultimate deer lure.

It doesn’t matter that he’s already got plenty on hand.

“Oh, guys could never use it all,” he said with a laugh. “But I can’t quit making it. That’s Heaven for me, being in what I call my scent shed. I could be in there all day.” 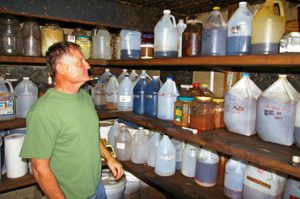 “Yes, he is obsessed,” agreed his wife Kathy.

He’s not alone. His business, Paul Pollick’s Whitetail Deer Lures, is one small part of a large and seemingly growing industry, one that is at its busiest at this time of year.

Neither the National Sporting Goods Association nor the National Shooting Sports Foundation ever have done surveys to determine the size of the scent market, according to spokesmen for those trade groups. But the U.S. Fish and Wildlife Service — which does a national survey of outdoor recreation every five years — estimated hunter spending on scents at about $13.3 million in 2006. And the figure likely is presently higher, said Dianne Vrablic, research coordinator for the Shooting Sports Foundation.

Most of those sales have historically been tied to doe-in-heat-type urine scents, Pollick said. But more recently, there’s been a lot of attention nationally given to pre-orbital lures, which mimic the scent a buck leaves at rubs, scrapes and especially licking branches.

Pollick — who makes his with forehead, tear duct, ear, nasal and saliva glands — said pre-orbital scents are a buck’s way of advertising his presence to other deer in the early season and prior to the rut.

“And the older and more dominant the buck, the more he uses those branches. It’s like a dog marking his territory; that deer has to lick that branch,” Pollick said.

“It’s his way of letting other deer know he’s there and figuring out who his competition might be.”

There’s science to that.

“Deer are incredibly social animals and scent plays a big part in that,” said Pennsylvanian Kip Adams, a deer biologist and outreach and education coordinator for the Quality Deer Management Association.

“There are many different pieces of information deer are leaving about themselves during the breeding season just by rubbing and licking. They’re leaving a lot more information than we hunters ever realized,” Adams said.

Other scents play a role at certain times of year. Pollick makes doe and buck sex lures for the peak of the rut, and an interdigital lure — crafted using the scent glands in between the toes of a deer’s hooves — good for creating trails leading to and around stands.

But there’s always more to learn about how deer communicate through scent, he said, which is why he’s so often in his scent shed, experimenting.