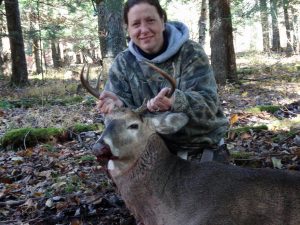 This is my first buck – 7 pt. I got it on Nov. 5th 2011 using a combination of your products. My boyfriend introduced me to your products the year before and I began archery hunting in 2011. We used buck inter-digital and buck preorbital on scrapes along with doe inter-digital on a few scrapes here and there prior to the rut…then just a week before the rut began using flaming doe along with all these in a scrape near where i planned to hunt. Used the flaming doe and doe inter-digital to make a drag from the scrape around my stand at 7 yards out. My buck walked right to that first scrape and followed my scent from it right to my stand…like he had a string on his nose. Even sniffed my boyfriends bow that wasn’t off the ground yet (we were in the tree just a few minutes!) and never wavered from the trail…just kept following it right into my shot! Every picture shown on the mount is one taken at scrapes that we used your product on!

Thanks so much and keep up the great work with awesome products.
Kathleen Weigl