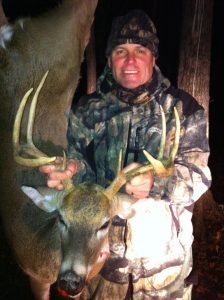 I made a mock scrape with your interdigital gland lure mixed with just a tad of buck tarsal and flaming doe. 4 days later, when I returned to hunt the spot, the scrape was TORN up and rub trees were nearby. As sundown approached, this really nice 8 pt came in with the scrape upwind from him and headed straight to the scrape. I’m a sold believer in Paul Pollick’s scents!! Won ‘t hunt without them!