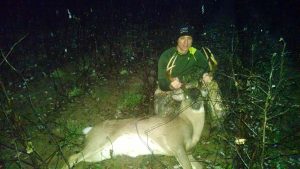 I had two cameras up on my lease since August and I never had one picture of this buck. I used your Oil Based Buck Preorbital and the Buck Interdigital on a mock scrape starting early January, as the rut starts really late here in South Alabama. He came out from a thicket into a cotton field in response to rattling and once he saw no other deer he continued into the field going away from me and getting further out of range. Once he was down wind from the scrape he made a beeline for it and came close enough for me to get a shot. Thanks for producing a great product!

I failed to mention the 6 pointer I killed as well. I had a scrape dripper set up on his scrape line and photos of him nearby. I used the same products on his scrapes as I did for the 8 pointer. I have used other products but never with any success, until now. You really have an excellent product. I will be placing another order with you for sure.
Thanks again,
Josh