I have used tinks 69  “doe in heat” for years and thought it worked pretty well. my buddy told me about Paul Pollicks scents last year and said that he heard it was awesome. We decided to give him a call and he actually answered the phone himself and he gave me a great deal of information and good advice on what to use and when to use it. I gave it a shot and bought his flaming doe in estrus and flaming seduction. I was in awe at how productive it was. We shot 4 nice bucks that week and they all came in like a freight train when they caught wind of it and we both passed up quite a few smaller bucks and many doe’s throughout the week  . It was obvious that they thought  there was a “hot” doe real close by. I highly recommend his scents if you’re a serious deer hunter. He explained to me how well they worked and he was absolutely right. He has it down to a science and its all real deer urine, glands, etc. Im so happy to have given it a shot and I will never buy anything else but his stuff from now on. Don’t waste your money. You have to try it yourself to believe it. Thanks Paul for your personal service and advice and I’m so looking forward to this year’s season. 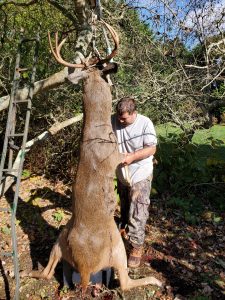